EVA WAS EERST Sitchin - Nibiru - Annunaki
Let us begin with an update from june 2020 - 10 years already have past since we wrote our site, Time flies. Planet X is now called planet IX. Possibly a lame attempt to fool the so-called conspiracy thinkers. They are still looking for planet X (planet IX). Although it is now thought that the mysterious planet could possibly be a small black hole. That would only strengthen our belief that our souls seek out a black hole after death. A mysterious black hole instead of a planet?. All options are still open ... Sitchin, Nibiru and the Annunaki - The essence of truth According to Sitchin there is a hidden planet in our solar system four to five times the volume of earth. The planet has an elliptic orbit and enters our solar system every 3600 years. In 2080 the next passage will happen with megacatastrophes as a consequence. The gods (called the Annunaki) came from that planet to earth and made hybrid humans to help them looking for gold. Their planet was cooling down and nano gold could warm it up. The story -according to Sitchin- was told by the Sumerians on their clay tablets. But we -and a lot of others- think Sitchin (or the Sumerians) mixed up some things. So it's simply impossible that a planet enters our solar system every 3600 years. That would bring such catastrophes that we would know about it for sure. We are not going to tell the whole story because we don't believe in it. But we are convinced: Sitchin’s key point is true: 'Human consciousness comes from intelligent beings living on another planet'. And maybe the so-called Annunaki were indeed searching for gold because a planet of a red star (like Scholz's star) tends to cool down. Add to that: recently scientists discovered that nano gold in the atmosphere (especiallly of a red star) could create an increase in temperature. But the temperature issue is maybe not that important. Important to us is that one of the oldest and most used symbols in the world (the winged sun) is depicted on the Sumerian seals. No need for a translation here because the symbol speaks for itself. Does that symbol represents our moon? It would at least explain why the Sumerians ruminated about a planet that once entered our solar system. A sun that flies, without obtaining any law, could quickly get wings in a symbolic thinking mind. Today we would maybe portray here in the same way. Is she the extinguished sun? Anyway, she is just as big as the sun, at least seen from Earth. The moon and the winged sun are often seen together on the Sumerian seals. Apparently Sumerians thought that both had a close relationship. That Isis and almost all other mother goddesses then again had a bond with the moon, is less strange when we consider they descended from the winged sun. Also the holiest animal -the bull- got wings. In ancient Sumer he was clearly connected with the moon and the winged sun. (After the mega disasters the bull had to be a god who came from the moon because of his life force and the shape of his horns reminiscent of a waxing moon.) Some say the winged sun represents the divine power Shamash, the ofspring of the moon ... but it must been said, nobody knows for sure. Fact is that to the oldest Sumerians the moon was far more important than the sun. If the Sumerians after thousands of years between the appearance of the winged sun and the emergence of their civilization (with the first writings) saw the moon and the winged sun as two separate celestial bodies, that would have been the most normal thing in the world. Did the winged sun eventually got phases and became the moon? To see the tree of life under the moon, is remarkable (http://www.darkstar1.co.uk/ds16.html).

Sumerians leaders were men. For the first time in history it seems obvious that men were in power. But they were no gods. Although they seem to have known that once there were gods on earth. And we think they knew those gods came from another star system. 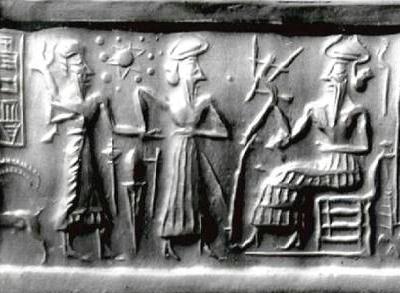 One of the most discussed seals -Cylinder Seal VA 243- Here you see a star system that is not ours. Dr Michael Heiser, an undiscussed authority in the field of Sumerian civilization, is absolutely sure about that because Sumerians depicted our sun consistently in a different way. And they only knew about five planets. So sitchin must have been wrong about the fact that our solar system is depicted here. In the middle of the seal you see a planet. (What else can it be?)

Sumerian star, moon and sun symbols As we said Sumerians must have been aware of the gods. The gods only could arrive here because our star systems passed each other at a close distance. Not that Sumerians ever saw the star system of the gods, but they knew about it. The gods were gone thousands of years before the Sumerians made their clay tablets. That they mixed up a lot of things is logical. Therefore we think that the flying sun was not the sun nor the star of the gods ... it was our moon ... Worldwide we see the winged sun. She a mystic symbol today. And Isis was the protagonist.

By the way: we love the soundtrack.